We activate our faith by openly living, growing, and sharing in God's Word.

Who Is Our Pastor?

Pastor Tom Ewing, was born on April 20th, 1956 in Winchester, VA.  He began serving as an Assistant Minister and Director of Youth at the First Congregational Church in Hudson, OH as a U.C.C. licensed Pastor in 1981.  During that 5 year tenure, he continued his education.  He completed his Master of Divinity degree at Ashland University Theological Seminary in Ashland, OH in 1985.  He was then ordained on Dec. 15th, 1985 at the First Congregational U.C.C. in Talmadge, OH, serving there for 5 years.

In 1990, Pastor Ewing began his ministry in Illinois as Senior Pastor of First Congregational Church of Lockport U.C.C.  Pastor Ewing is the father of two children, Stephanie and Nathaniel.

On January 3rd, 2001 Pastor Ewing began his leadership at St. Luke United Church of Christ.  A contract was formed that he would provide leadership for one year.  It was an offer made in hope and with the anticipation of a long-term relationship.  February 17th, 2002 Pastor Ewing was formally installed as our 13th full-time pastor.

That year was extra special, not only because we had hired on our newest pastor, but also because that year marked our church's 100th Anniversary!

"The history of caring was evident in the warm way me and my family were welcomed into the congregation.  The greatest hope lies in the renewed vitality of the ministries of St. Luke." - Pastor Tom Ewing

What Are Our Core Values?

The United Church of Christ (U.C.C.) is a distinct and diverse community of Christians that come together as one church to join faith and action.  With more than 5,100 churches and 1.1 million members across the U.S., the U.C.C. serves God in the co-creation of a just and sustainable world.  The U.C.C. is a church of firsts, a church of extravagant welcome, and a church where "…they may all be one" (John 17:21).

Shine in the love of God's grace, every day.

At St. Luke U.C.C., it's our mission to help you explore your relationship with God and improve those meaningful relationships in your family life. Join us each Sunday and experience the warmth of faith and the strength of our community.

St. Luke United Church of Christ in Beecher, Illinois is approximately 30 miles south of Chicago.  Timothy L. Miller settled the current village in Washington Township in 1862.  By the time of incorporation in 1870, the name "Beecher" was given to the village in honor of Henry Ward Beecher, the infamous orator of that day.

Religion played a very important role in the early settler's lives.  They worshipped at church, their children attended the church school, and most of their social activities centered around their church.

Since 1864, many of the German residents had been worshipping at a small church about 2 miles southeast of the current village.  Around the turn of the century, some of the members of that church considered establishing a new church to be located within the village boundaries.

Plans for the erection of a new building advanced rapidly.  After careful consideration, the present site of the intersection of Penfield and Woodward Streets was selected.  The cornerstone was laid on May 4, 1902.  The new church was dedicated in Sept., 1902 and was named Deutsche Evangelishce Saint Lucas Kirche (German Evangelical Saint Luke Church).

Rev. Daniel Bierbaum accepted to call to serve as the first pastor on June 30, 1902.  The new congregation grew rapidly under his leadership and guidance and dedicated the present worship site in Sept., 1902.

Organized as a German speaking congregation, all services were originally conducted in the native tongue.  In the 1920's, some services began to be occasionally held in the English language.  On Feb. 3, 1946, it was declared that all worship services would be in English.  After the merger of Evangelical Churches and Reformed Churches in 1934, the name of the church was changed to St. Lucas Evangelical and Reformed Church.  Women of the church were granted voting rights at the congregational  meeting on Jan. 16, 1944.

WHAT IS OUR MISSION? 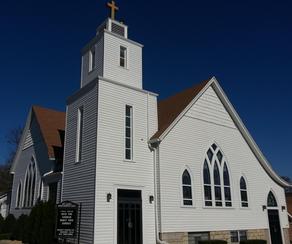